I didn’t know I was pregnant until I was six months; I was still having my periods and my stomach was flat. It wasn’t until I went swimming and someone approached me and asked me if I was pregnant and I thought maybe I should go to the clinic to check. When the nurse told me I was, I was so shocked. I wanted to cry, but there was nothing I could do, so I just laughed! I was 16 at the time, still in school and just about to do my GCSE’s.

I decided to stay in school and finish my exams. I didn’t know when I was going to get the chance to do them after my baby was born, or when studying was going to become easy enough to be able to take them again, so I just sucked it up and went to school. I felt that I had the worst pregnancy because of this. I didn’t want people to know I was pregnant because I knew I was so young and worried what people would say – people can be very judgemental. I would always go in wearing extra baggy jumpers and big coats to hide my bump, even though it was the middle of summer. I was so hot, but I never took them off. I sit back now and think ‘how did I manage it?!’

My baby’s dad went to the same school as me but we broke up just after I found out I was pregnant. Our relationship was always on-and-off so I didn’t miss him, but there were times when I would really want him around for support. It would get me down sometimes thinking that he could go on and have a normal life, while I was stuck carrying the baby. I felt he wasn’t under the same pressure as me and my friends who knew kept asking if I could handle a baby. My answer was simple; I was six months pregnant and there was a baby inside me. Whether I liked it or not, it was going to come out!

I joined FNP during my pregnancy. I had two family nurses over the two years and both were so supportive. When I was 16, I was immature and I did monkey-around a bit, but when I found out I was pregnant, so much changed, and FNP definitely helped me through that. The nurses would tell me new things during visits and what was going to happen to me, which would make me start to think differently.

One thing my nurse really helped me with was breastfeeding. I had no clue how to breastfeed, or even how the milk came out, but she brought model boobs to show me how it worked, and a life size baby to show me how best to hold my baby. I would never have known that stuff if she hadn’t shown me. When my baby boy, Ayden, was born, I breastfed him for two months but changed to formula. I loved breastfeeding – you can actually feel the bond between you and your baby which is amazing.

I moved out of my dad’s when Ayden was around seven months old. We were just not getting along – it was a house on fire! I lived with my nan while I was being assessed by the council and was eventually was offered a room in a hostel. Living there was difficult. I was given a double room on the fourth floor which was hard to get to when I had a baby and a buggy. I also had to share a communal bathroom and kitchen and didn’t have a lot of room to let Ayden crawl around. As Ayden grew, the room got smaller. We needed more space.

After two-and-a-half years, I eventually moved into a one bedroom flat which was great. As soon as we moved, I could see straight away that Ayden was happier. He had so much space to crawl about!

Throughout the changes in accommodation, my family nurse continued to visit me which I really appreciated, especially during my time at the hostel. There were times where I would want to break down, but my family nurse would always reassure me, telling me something would happen soon or giving me advice that would help me.

Being a young mum

Since I became a mum, people do look at me differently. I do feel like people always have something bad to say, even when they don’t know the situation. I’m sometimes looked down on because I’m young and I have a child. However, being a mum has changed me very positively. I’ve matured, it’s made a better person and it has given me so much motivation do something for myself and my son. I’m currently re-sitting my maths GCSE so that I can begin studying to be a midwife next year.

I really enjoyed taking part in the BBC series ‘Becoming a Mother: A Hot Cup of Tea with Hollie McNish’. This was the first time that I’ve ever properly told my pregnancy story and I hope it’ll let people know that young mums shouldn’t be judged because we’re normal people. We’re still mums, we still have ambitions and goals; just because we’re young doesn’t make us different. I hope people listen to my story, can relate and get a little bit of inspiration from it.

You can listen to Chante’s interview as part of the BBC Woman’s Hour series, ‘Becoming a Mother: A Hot Cup of Tea with Hollie McNish’ on the BBC website. 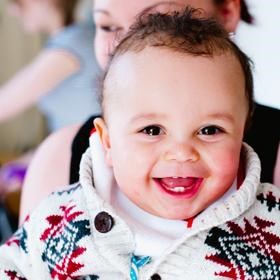