When I found out I was pregnant, I was 16 and in the middle of completing my GCSE’s. It was a massive shock, and really difficult. I remember being picked up for school and the driver having to wait for me because my morning sickness was so bad, but I managed to get through it, and completed my GCSE’s with some pretty good results. I told my mum I was pregnant first which was pretty daunting, and after that, I went to speak to some doctors and midwives. It was during one of my midwife appointments that she mentioned the FNP programme to me, and asked whether it was something I’d be interested in. I’d helped looked after my siblings when they were younger, but I knew having a baby of my own would be so different, so I was happy to have some extra support.

Having a family nurse gave me the confidence I now have as a parent. During my time on the programme, I knew that if I had a question, however silly I thought it might sound or obvious the answer may seem, my nurse was always there for me, no matter what. She didn’t judge but was there to support me. She also gave me a helping hand and encouragement when going for my first job interview to help me prepare, and once I started working, gave me information about other services and schemes in the area that I could get involved with that could support me and my little boy, such as Childcare voucher schemes. I would never have known where to start to find all the information she had!

The programme was also great in making me feel less lonely. As a young parent, especially when a lot of my friends were at school and college, I sometimes felt like I had nobody to talk to, other than my family. Having my family nurse visit – a familiar face that is there for you – was really uplifting. I also met other FNP parents during Christmas meet-ups or summer picnics, which I found really helpful.

I’d been graduated from the programme around two years when I was asked if I’d be interested in becoming a ‘Client Board Member’ to contribute to the local FNP Advisory Board. From having such a positive experience on the programme, and enjoying it so much, I really wanted to get involved. I thought I’d be able to draw on my first-hand experience to show just how experience of the FNP programme has helped me, and could help other mums in the area.

After a process of interviewing and training, I was able to attend my first Advisory Board in April 2017 alongside the FNP team, commissioners and other Board members. It was a great experience, and I was able to draw on my past, to talk personally about my journey through FNP and how much the programme helped me. Everyone on the Board made me feel comfortable and confident, they were really receptive to my messages and expressed just how much having a former client on the Board helped to show how FNP works in the real world. Since attending the FNP Board, I’ve now been asked to attend two other meetings for 0-19 services in the local community which I’m really happy to be involved in. I definitely feel like I’m giving something back!

Having a client on our FNP Advisory board has been a team goal since we first launched FNP Bucks in 2012. We have made attempts in the past, some more successful than others, but ultimately, our vision was for this to be a meaningful role, not tokenistic, and for our client board member to have the same responsibilities as the other board members.

We finally achieved it, as Codi describes, and we couldn’t be happier. Having a client like Codi on our Board gives us:

Codi is valued and respected by all on the FAB and we are looking forward to her on-going involvement and contribution. 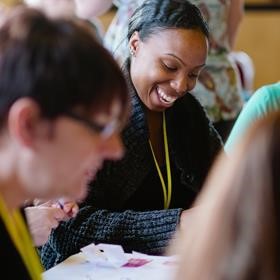