FNP turns 10: 'Becoming a mother should make you feel invincible'

I was 17 when I got pregnant and my gateway midwife recommended FNP. That’s when I met Sharon, my Family Nurse.

At first I was very against FNP – I’d heard a lot about social services and I was scared about becoming a mum and didn’t want anyone to know – but when I got to know Sharon I couldn’t have been happier.

How FNP helped me 8 years ago

When my son Hamza was born, I felt under real pressure. As the eldest daughter in the family, everyone had high expectations of me and wanted me to be a role model for my four younger sisters.

Looking back over my time on the FNP programme, I have some clear memories of how Sharon really helped me with caring for Hamza.

I remember the first time Sharon held newly born Hamza and she started to talk to him. I thought she had gone mad! I always wanted to do the same but thought I would look crazy. Seeing Sharon do this gave me confidence and made me realise it was a natural way for me to communicate with him. After watching Sharon, Hamza and I had lots of conversations and I felt our bond grow stronger.

At first, I found it really difficult and scary trying to bath Hamza by myself. I felt I wasn’t able to do it, so together with Sharon, we set this as a goal for me to accomplish. We talked about it and went through techniques, and when I finally did it on my own I felt really happy and proud. Sharon praised me – she was always proud of me and told me so.

I breastfed Hamza for four days after birth, but my nipples began to crack, bleed and became very sore. I was in excruciating pain but I was worried about being judged if I started bottle-feeding. When Sharon visited, I told her and she was the only one who told me about the creams available to soothe the pain, and said that it was my decision to choose how I fed Hamza. Sharon had told me about the benefits of breastfeeding, but said that it’s ok if I chose not to breastfeed, especially as I needed time to heal and recover.

I never felt that Sharon judged me. I knew that she would not be disappointed and she understood me as a mother. She was my support and even though she has stopped seeing me, she has left her shadow behind which still helps me today.

The difference FNP has made since those early days

Since Hamza, I have gone on to have more children and Sharon’s advice and support has continued to help throughout my motherhood journey. Although she was only present with Hamza, because of the invaluable knowledge she imparted, it seems like she played a massive role in my other children’s lives too.

Hamza has exceeded the level of empathy any mother could expect. He is doing amazingly at school and is such a responsible big brother. The bond between Hamza and me is special – all thanks to the techniques and skills Sharon has showed and taught me.

Passing on what I learned

Since graduating from the FNP programme, I have been informing people about what and who FNP are. I have even made copies of the file sheets that Sharon had previously used with me to help family and friends keep track of their goals and provide some extra support to them when they needed it.

I now volunteer as a peer supporter with Better Beginnings. I want to support people who are in the same situation as I was in, and show them that asking for help doesn’t make you weak and incapable. It shows that you are strong and that you care. It proves that you have good sense of understanding and it shows stability, commitment and acceptance.

The lasting impact of FNP

The time I spent with FNP was the most beneficial two years of my life. It taught me how to care for my children, as well as myself. I think one thing people forget is that becoming a mother doesn’t make you invisible. I often hear things like “My children are everything”, “They come first”, “Don’t worry about me” - but I feel sometimes, these phrases take away the practical side of motherhood. I’ve come to understand that sometimes it’s okay to take time out to think about yourself. FNP made me strong enough to not give up and realise that I am an amazing mother. 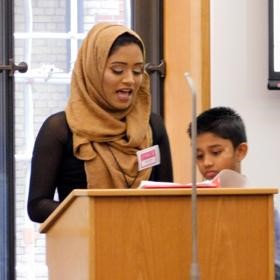