From miracles to logic models

A famous Sidney Harris cartoon depicts two men contemplating a mathematical equation scrawled on a board. In the middle is written in capital letters ‘THEN A MIRACLE OCCURS’, prompting one man to say to the other, “I think you should be more specific here in Step 2”.

Interventions for children and families often rely on miracles. Not the two loaves and five fish variety, of course, but the tacit belief that ‘If we do this, then somehow we will get these results’. How this will happen isn’t quite clear, but it seems a good idea. It feels right.

Creating a logic model is about unpacking that ‘somehow’, or deconstructing the miracle. It is sometimes likened to peering inside the black box that stands between the inputs – what the intervention does – and the outcomes – what it seeks to achieve.

In essence, a logic model explains how and why an intervention should achieve its desired effects. It is a hypothesis or theory. Indeed, often it is referred to as a ‘theory of change’.

Take a parent training programme. Why should this reduce children’s conduct problems? Typically, the logic is that the training helps parents to develop skills such as praising good behaviour and dealing calmly with tantrums, and that this changes how children respond.

Why have a logic model?

As part of the ADAPT project, teams in 11 Family Nurse Partnership sites across England have been developing logic models for their adaptations to the programme. A logic model serves several purposes.

In the first instance, it is arguably an essential part of intervention design. It helps with working out what needs to be done and why. In the case of developing a logic model for an existing intervention, it can assist with identifying and stripping out what is superfluous.

When writing a logic model involves service providers and other relevant stakeholders, the process tends to flush out different understandings about the intervention. Initially this can be alarming, but ultimately it contributes to generating a common perspective.

Logic models also help with implementation, especially if they are used in training. Generally, we are likely to do something better if we know why we are doing it. If a practitioner knows how an intervention is meant to work, they are more likely to implement the key parts.

Lastly, logic models help with evaluation because they highlight what needs to be measured, from the delivery of core components to the outcomes on which we hope to see progress.

What makes for a good logic model?

Logic models can take different forms. Sometimes we encourage providers to sketch a ‘theory of the problem’, and then on top of that to plot a ‘theory of the solution’: how to reduce risk factors – or the links between them – and boost protective factors.

In a simpler approach, which is being used in ADAPT, we sometimes just focus on developing a ‘positive logic model’ showing how the intervention components contribute to the desired outcomes.

There are other approaches, and none is necessarily better than the others. The most important thing is to have tools that enable people think about what they do and why.

So, what are the features of a good logic model?

First, it will have a clear structure. Inputs, mechanisms, outcomes (possibly intermediate and ultimate) and underlying assumptions will be separated out.

Second, each element will be described succinctly and precisely. For example, what does a given aspect of the intervention entail, and what exactly is the desired outcome?

Third, the links between different elements in the logic model will be explained. Why is A thought to lead to B? To those familiar with the intervention it is often self-evident, but there are hidden assumptions. These need to be articulated.

Fourth, the logic model should be parsimonious – nothing missing, nothing redundant. This requires discipline but it forces those involved to think carefully about whether what is included is necessary and if anything is missing.

Fifth, a logic model should be, well, logical. This means that it should be fairly obvious why A could lead to B, otherwise we are back in miracle territory.

Sixth, a logic model would ideally be supported by science. There are multiple theories of how child development problems emerge and how to address them. Equally, there is a vast empirical research to underpin these. Drawing on these can make the model more plausible.

Seventh, a logic model benefits from being informed by the perspectives of several stakeholders – experts, commissioners, practitioners and potential users. This will ensure that it is rooted in science but also everyday reality.

Presentationally, it is helpful if a logic model is depicted diagrammatically but with an accompanying narrative.

The diagram should separate out the different elements, working from left to right in the order of inputs, mechanisms and outcomes, with arrows to indicate causal links. When this is done well, it can be read easily from left to right and from right to left. It flows.

The narrative should describe each element and, crucially, explain the arrows.

Logic models are not without their critics. One line of attack if that they oversimplify. In reality, families’ lives are messier and interventions are more complicated.

The observation is fair, but in response you could say ‘That’s the point’. There is a place for mapping the complexity and trying to understand how tweaks to one variable affect another. But you quickly end up with what looks like an explosion in a spaghetti factory.

A good logic model captures the essence of an idea in a way that is simple and compelling. A practitioner or evaluator, even a service user, should be able to remember it.

Another critique of logic models is that they see the world through rose-tinted spectacles. A leads to B and we all live happily ever after.

This is only partially true. A logic model is a hypothesis, not a prediction: it is saying ‘this is plausible’, not ‘this will happen’. But, fair cop, it is helpful also to think about what might happen if things do wrong. Enter the ‘dark logic model’! [1]

A dark logic model is a hypothesis about how the intervention might cause harm. For instance, encouraging a young pregnant woman to stop smoking seems inherently sensible, but if friends and family also smoke it could cause conflict between them.

This is not necessarily a reason to abandon the original plans but it does highlight the need to consider how to avert or mitigate possible adverse effects. There is a danger of getting too dark and forecasting apocalypse, so an assessment of the likelihood of risks is sensible.

A thing of beauty?

Drafting a logic model can be hard graft. Initially it creates lots of mess. It’s not much fun. But somewhere along the line there is a moment of magic and a clear image emerges that we can stand back and admire. Perhaps not quite Van Gogh but, dare I say it, a thing of beauty.

By Nick Axford, Head of What Works at Dartington Social Research Unit 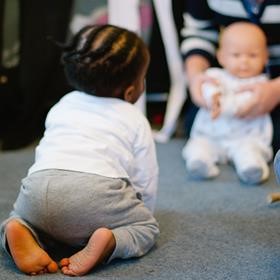