"I wanted a different future for my son" - Sara's story

Young mums who enrol on the Family Nurse Partnership (FNP) programme are often vulnerable, and have had difficult upbringings. The blog below is from young mother, Sara*, a graduate of FNP. As the eldest of three siblings from a family with a history of substance misuse and neglect, social services intervened when she was just 13. FNP was there when she became pregnant at 16 to provide some much needed support and guidance.

Join the conversation on Twitter:@FNPNationalUnit

At 13 I was taken into care and put in emergency accommodation. Subsequently, I was sent to a children’s home and separated from my younger brother and sister. When I was 16, I found out I was 21 weeks pregnant. At the time, I enjoyed school and had a passion for knowledge, but I also had a history of aggressive outbursts which stemmed from being bullied.

I became involved with FNP when Louise, a family nurse, visited me 24 weeks into my pregnancy and I decided to continue with the programme. I was in a stable relationship with my baby’s father and lived with his mother in their family home.

After experiencing my parents’ substance misuse as a child, I have a serious fear of needles and I couldn’t have my bloods taken during my pregnancy. I felt judged by other professionals and everyone around me about this, but my family nurse, due to the personal service she provided, understood the real fears I had. She listened to me and told me about the different services I could go to try and get help for the problem. She also helped me to create and maintain a smoke free environment around myself and my unborn baby with the help of notices/posters.

The best thing about having a family nurse was the home visits, which made the service feel more personal and confidential. I liked the activities. My favourite was learning about ‘emotional refuelling’ which is a method that showed me how I could refuel after caring for a baby all day to sustain happy emotions rather than becoming tired, run down and depressed. Other activities during Louise’s visits helped me understand how I could tune into my baby’s feelings, learn how keep him safe and care for him when he was unwell. There was also a big focus on his development, managing his behaviour and how I could build a good relationship with him.

When the time came, I felt as if I was completely ready for my baby's birth, having filled in two birth plans – one of which included my family nurse. She had shared with me all her knowledge on childbirth which I took on board and going into birth, I wasn't aware of any complications, other than that my baby was surrounded by a large amount of water. Even though I was prepared, I did end up having an emergency C-section and was put to sleep. This had a negative effect as it delayed me meeting my son, Matthew, who was admitted to the Neonatal Ward, and led to me becoming postnatally depressed. My family nurse was the core encouragement which led to me breastfeeding and I don’t think I would have breast fed otherwise.

Things began to spiral downhill after the birth, and although I remained engaged with FNP, my mood and problems with my relationship led to me losing two tenancies which caused social care to intervene. Matthew was put on to a child protection plan and it seemed my whole world was collapsing around me. My mood became even lower which caused me to start drinking, taking drugs and self-harming. I left Matthew with my grandparents a lot.

During my dark period I continued to see my family nurse. She worked with me to look at my life course and what I could do to change it. As a result of this I found myself a house and turned it all around. I met with social care with intensive help from my family nurse and managed to hold my own in the meetings. The child protection plan was stepped down to a child in need in three months – a record where I am from. Within six months, social care involvement had ended. Finally my world was being rebuilt.

Since graduating from the FNP programme, I have maintained my own house and made a home for Matthew. I am studying child care at college and Matthew regularly goes to nursery. He is a bright happy boy, who is meeting all his milestones, and to some extent, exceeding the expectations for a two-year-old.

I wanted a different future for my son, unlike the one I experienced, and I’m proud to say I’m working towards that. However, I doubt that any of this would've become a reality without my family nurse.

* Name has been changed in this blog to protect the identity of the author. 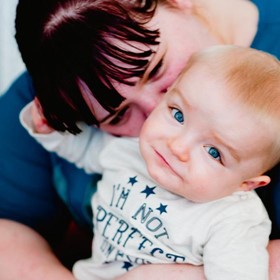