A few months after my 18th birthday, I had just moved into my first home and started a new job; team leader in a local pub after a short period of unemployment and homelessness. I was enjoying being back on my feet and doing all the things 18 year olds do, when I unexpectedly found myself pregnant.

Having been the daughter of a single teenage mother this was a scenario that I was desperate not to repeat, however it looked as though life had other plans. I booked an appointment with the midwife who asked if I wanted to join the Family Nurse Partnership programme. I had no idea what this was and said yes without really giving it much more thought.

At around 16 weeks pregnant I received (and ignored) one of my first calls from my family nurse, Angela. I would continue to ignore these phone calls and texts for the next few weeks hoping she would leave me alone – she didn’t.

Angela gently worked to build a relationship with me and to understand as much as she could about my early life and experiences. At the time, I had no idea how these early experiences as a child could influence the type of parent I would be. When I was pregnant I had an ACE (Adverse Childhood Experiences) score of eight, with very few resilience factors.

By the time my son, Findlay, was born I felt ready for the challenge ahead and confident in the knowledge that I had Angela to support me. I had stopped smoking, made as many plans as I could to help with the transition to parenthood and even planned to breastfeed my baby, the first person in my family to do so.

A few weeks after the birth, I became very low in mood and tearful which resulted in a diagnosis of postnatal depression. My mum became so worried about me, that she called Angela at lunch time on New Year’s Eve. By 4pm that day Angela was sat at the end of my bed arranging an emergency appointment with my GP.

Slowly but surely I started to feel better and ready to start making make plans for the future.

When Findlay was a few months old I decided I wanted a different career. I had received such fantastic care from my midwife and my family nurse that I was inspired to start the journey to become a midwife. When Findlay was nine months old I was enrolled on an access to midwifery course whilst continuing to work nights in a hotel.

Shortly after Findlay’s first birthday, I was offered a place to study midwifery at my first choice university - I was absolutely ecstatic to be starting the journey to my dream job!

After spending time with health visitors, as part of my degree, and doing some research I decided health visiting was the role for me. Shortly before qualifying as a midwife, I was offered a place on the Specialist Community Public Health Nursing (SCPHN) course and I am now a qualified Health Visitor.

The knowledge I gained from my time as a FNP client has been invaluable in my work as a practitioner. I currently work in an area of high deprivation, with limited resources and staffing as well as a high number of safeguarding families.

In my area, the local FNP team offer Knowledge and Skills Exchange packages; I attended the session on ‘Engaging Marginalised Clients’ and found it to be so useful in my day to day practice and the way I think about managing my visits.

Families in our care often expect professionals to come and go and can understandably be reluctant to engage with the service because of this lack of trust. By taking a gentle but persistent approach to breakdown these barriers, we can truly deliver early interventions that reduce the number of children with high ACEs and in turn support them in making better choices later on.

However, there can often be difficulties with families graduating from the FNP programme into health visiting. Sadly, we are often not able to offer, nor have the expertise to deliver the level of support these families require and this can often leave parents feeling let down. Thus begins the cycle of breaking down the barriers once more.

This is an area that requires a joined up approach and something that I’m keen to work more on and I’m currently working on a package of structured visits to our safeguarding families to try maintain support for them. I hope to be able to work with FNP in our area to develop a pathway for graduates once this piece of work has finished

I am now 27, with a degree in midwifery, a post graduate diploma in Health Visiting and about to start my Masters Degree in Strategic Leadership.

I have two happy, cheeky and resilient boys who are enjoying happy childhoods without the impact of ACEs thanks to an early intervention programme that their mother desperately tried to avoid! 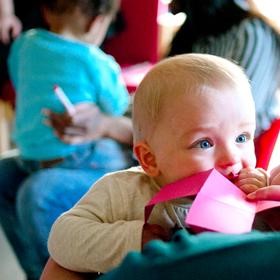