A productive year for FNP 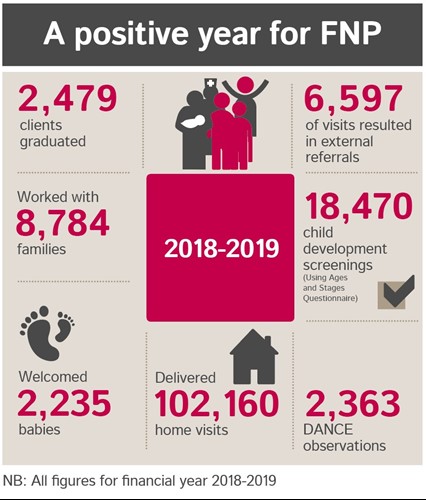 It’s been a productive year for FNP as our infographic shows. These achievements are proof of the hard work and commitment of local FNP teams in England. Their passion and professionalism underpins the delivery of FNP as an effective programme of early intervention at nearly seventy sites across the country.

The skill and dedication of FNP nurses makes a positive difference in the real world, helping often extremely vulnerable and disadvantaged clients build a better future for themselves and their children.

For the FNP National Unit this past year has seen a number of significant developments.

Then, in March, the Duke and Duchess of Cambridge visited several local organisations in Blackpool and met an FNP client and supervisor. Their visit highlighted the valuable work done by family nurses and how they help young mothers give their children the very best start in life.

Also in March, we welcomed David Olds, the founder of the FNP programme, to the UK. David took part in a webinar with FNP sites across England, was interviewed by an FNP graduate, and gave an update on the programme in America.

We also reported on our stop smoking in pregnancy quality improvement project, which concluded in the summer.

At various points during the year various FNP sites received awards from local stakeholders for their innovative work. Gateshead and Sunderland, Lambeth, Plymouth, Bristol and South Glos. and Norfolk teams all received awards.

The Duchess of Cambridge met FNP graduates and their children at a visit to Southwark FNP team in September.  The Duchess also joined a round table discussion chaired by FNP National Unit Director Ailsa Swarbrick to find out more about the local delivery of FNP and how the programme has developed nationally in England.

In October our three-year ADAPT project which tested adaptations to the FNP programme concluded.  A final report on how we are using clinical evidence from the project to adapt the programme so that it better serves the needs of clients will be published in March 2020.

Meanwhile, the international evidence base for FNP continues to grow.  In November, new randomised control trial studies showed the long term benefits for children and mothers who participated in the Nurse-Family Partnership programme in the U.S.

This year has been one of outcomes and achievement and we look forward to the coming new year as being one of further opportunity for the FNP programme in England.