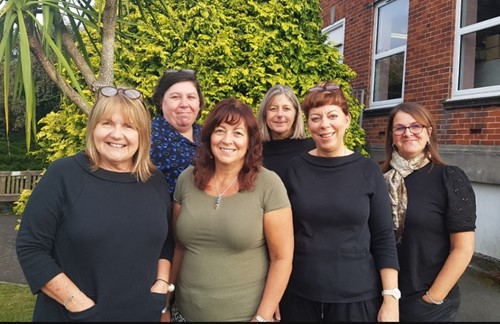 The excellence and dedication of the FNP team in Plymouth has been officially recognised with the team being announced as joint winners of the Best Clinical Team category in the 2019 Livewell Southwest* People Awards.

In paying tribute to the FNP team the nomination said: “The Family Nurses are an inspiration who thrive on a challenge. They go the extra mile for their clients because they really do care about them.”

Speaking about winning the award, Fay Cook, FNP Nurse Supervisor said: “I’m delighted that FNP is now firmly embedded in the organisation and that we have been recognised for the work we do with some of the most vulnerable families in Plymouth. It was a fantastic evening which showcased many amazing Livewell staff and services.”

A judging panel of senior leaders and staff from across the organisation agonised over more than 260 entries before selecting the winning teams. Central to the judging criteria was how the nominees reflected Livewell’s values of respect, kindness, ambition, responsibility and inclusivity.

Also nominated for the award alongside the FNP team, were Greenfields recovery unit for women with severe and long-standing mental health problems and Plymouth Neuro-Rehab Unit. In past years there has been only one winner, but this year, the Awards Board felt it was too difficult to choose just one from the three nominees so all were jointly honoured as Team of the Year.

Angie Saxby, associate director of HR and engagement at Livewell Southwest said: “We would like to congratulate all the winners and nominees who were recognised for the work that they do for the people we care for. Each and every person nominated should feel really proud of the impact they are clearly making on the people they support and their colleagues.”

Read more about the work of the FNP Plymouth Team here.