Skip to main content
Home > News > This is how we do it! – Bristol and South Gloucestershire FNP team scoop awards trophy

This is how we do it! – Bristol and South Gloucestershire FNP team scoop awards trophy 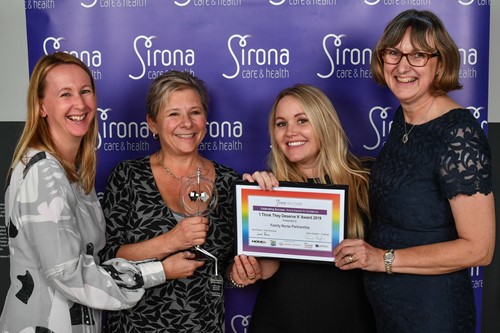 The Family Nurse Team in Bristol and South Gloucestershire have scooped a prestigious award in the Sirona Annual Awards for Excellence 2019.  The FNP team were nominated after being praised by Bristol City Council for their effective partnership working and in making a positive difference to the lives and prospects of teenage parents and their children. The team were awarded a trophy in the I Think They Deserve It award category.

The nomination by Bristol City Council said: “The FNP team has worked with us across a number of different agencies, such as housing and education, in order to help us identify the barriers facing their clients. In doing so, they have helped city agencies become more accessible to vulnerable populations and have improved overall outcomes. Notably, they do all of this work with a smile, and are a consistently positive presence within the city.”

Speaking about the team’s success, Nikki Lawrence, FNP Supervisor said:  "We are very proud to receive this award as the ACE agenda is so pertinent to the work we do. The FNP programme already supports trauma informed practice and it has been very rewarding to share our expertise with Bristol City Council and many partner agencies across the city and help them to meet the needs of their clients in an ACE-informed way."

Bristol City Council further praised the work of the FNP team including around Adverse Childhood Experiences (ACE) in a specially commissioned video.  View it here.

Nearly 300 nominations were received for this year’s Sirona Awards which are held annually to mark Sirona’s foundation as a not-for-profit social enterprise.