My 17th birthday surprise was finding out I was pregnant – it was such a shock and I was petrified! I remember lots of thoughts whirling around my head – college is going to kick me out, what do I do, I don’t even know how to change a nappy! Early in my pregnancy, I had a call from a family nurse, Lita, who asked whether I’d like to join the Family Nurse Partnership and receive a bit of extra support. She explained what the programme would include, and initially, I was really surprised – I didn’t think young mums had their own support – but as I’d never had a baby before, and I wasn’t sure what to expect or what to do, I decided to take the opportunity.

Pregnancy flew by, and my little boy, Stanley, was born after 41 weeks and three long days of labour. He was absolutely perfect and I was so happy. During pregnancy, the thought of breastfeeding scared me – What if he didn’t latch? How can I breastfeed in public? Won’t it feel weird? – but Lita talked to me about the benefits and answered all of my questions, putting my mind at ease. I was determined to give it a try and was overwhelmed when Stanley latched within the first 24 hours of giving birth. Lita talked me through some different sitting positions to support him and talked me through any problems I was having. I was so proud of myself, and Lita’s encouragement really built up my confidence.

I decided to go back to college two weeks after Stanley was born. I had been studying health and social care before giving birth, and really wanted to finish the course to ensure I had my qualification. The nursery next door to college agreed to look after Stanley while I was in class, allowing me to pop in when I needed to.

The transition back in to my studies was hard at first. Getting up in the morning and making sure not only I was ready, but Stanley was too, could be quite difficult, but we started to get into a routine after a couple of weeks. Things were going well, until I started experiencing negative comments about my choice to breastfeed from my college tutors.

Stanley didn’t like being fed from a bottle, and refused to take it when I expressed, which meant, during college hours, I had no choice but to leave every couple of hours feed him. I was doing really well and wasn’t falling behind, but I often had tutors telling me to find another way to feed him, prompting me to try bottle-feeding instead of breastfeeding numerous times.

I had made the decision that, if I could, I would continue breastfeeding Stanley until he was at least one-year-old, and felt disheartened that my tutors, instead of supporting my decision, were trying to get me to bottle-feed like other girls in my class. I spoke to Lita straight away, and she told me that, ultimately, this was my decision, and that college could not force me to stop – especially when I was the furthest ahead in my class and completing all of my work to a high standard. She praised me and told me how well I was doing, which gave me the confidence to stand up for myself and tell my tutors that I wouldn’t stop just yet.

The power of FNP

I ended up breastfeeding Stanley until he was almost 14 months old, and received my health and social care level 3 qualification. I’m now working as a Carer and I am really proud of myself, for not only having a baby, but continuing to work through it. I know I couldn’t have done all of this without my family nurse – Lita has been my rock throughout my journey with Stanley. She’s never forced me to do anything I don’t want to do, but she has encouraged me, built me up and helped show me skills and ways to make things manageable. I know she’s always ‘got my back’ and even the littlest things, like her saying ‘you can do it’, have really helped to make a big difference in my life.

Becoming a young mum was the best thing that ever happened to me, and it happened just at the right time in my life. Stanley helped me to avoid the negative people in my life and the unhealthy choices, such as drinking and partying, but instead, filled me full of ambition. I want what is best for him and, when I graduate from the programme in a couple of months, I definitely want to go on and do some night classes or further education to potentially try and become a family nurse in a few years. I love the idea of helping other mums the way Lita has helped me and becoming the source of inspiration and help. 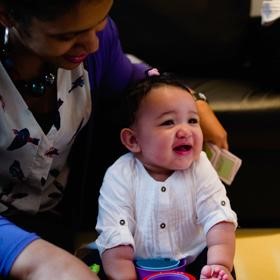