MPs' call for an “early years revolution” in a new report published today (Tuesday 26 February) by the House of Commons Health and Social Care Committee.

In the report, based on its recent inquiry, the committee calls for a long-term, cross-Government strategy for the first 1000 days of life, setting demanding goals to reduce adverse childhood experiences, improve school readiness and reduce infant mortality and child poverty. It also recommends that the Healthy Child Programme is revised, improved and expanded to include a check at age 3-3.5 years old.

The FNP National Unit submitted written evidence to the inquiry last autumn, making the case for a public health focus which looks also at the wider determinants of health, as well as long term funding with strong local and national cross sectoral leadership, and different approaches to evidence.

FNP National Unit Director Ailsa Swarbrick was invited to give oral evidence to the committee in November 2018. The report makes the case for the importance of learning from and implementing evidence-based practice in early years programmes and interventions. It cites Ailsa’s comments given during an inquiry hearing:

“There should be investment in thinking about what is valuable evidence, and what different forms of evidence there might be in this space, given the need for thinking long term and given that we are dealing with very complex systems where it is not always easy to attribute direct cause and effect.”.

The report highlights FNP as an example of a relational, evidence-based targeted intervention for vulnerable families. It reinforces the endorsement for investment in FNP and the FNP National Unit’s ADAPT project made by the House of Commons Science and Technology Committee’s inquiry into evidence-based early years intervention in 2018.

The report goes on to say that:

‘Investing in the early years is the best investment any government can make and saves money in the long-term. We recommend that the Government use the 2019 Spending Review as an opportunity to initiate the next early years revolution with a secure, long-term investment in prevention and early intervention to support parents, children and families during this critical period’.

The committee also sets out six principles that it believes high-quality local services for children and families should follow:

“This inquiry has provided a welcome opportunity to highlight some of the most pressing issues facing commissioners of critical early years services today. The challenge of understanding evidence, the balance of universal services and targeted services, and the need to join up to deliver what families need. It clearly states what’s at stake - the health and welfare of a generation of children – and what can be done to help give very young children the best start in life.”

The full report can be read here. 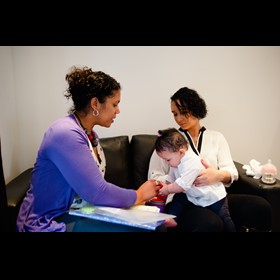